I’m back in LA after spending a few days in New York. It was a little hectic shuffling around from NY to Newark to Albany and back.I crammed a lot into six days. I landed late Tuesday night and took a cab straight to Carmen and Jim’s. I was in bed by midnight, and up by 6:30 to squeeze in my long run before heading to Newark for a school visit. I’ve complained enough about that long run. Snow flurries, 28 degrees, poorly dressed. It was the worst, but I got it done. When I got back I couldn’t even talk to Jim. I was awkwardly trying to speak, but my lips were frozen. It wouldn’t have been bad with gloves, pants and a jacket. That was bad planning on my part. I didn’t even drink any water or practice any fueling. I just ran (slowly) and felt sorry for myself the entire time.

After my run I took all my stuff and headed to Newark to visit North Star Academy’s Valisburg Campus. Our CEO at Equitas told me she’d never seen a more rigorous Kindergarten program. They were so welcoming and their model inspired me. It was also great to see that our current Kindergarten team at Equitas #1 is equally strong. I was reminded at the importance of having a visually appealing school. It correlates with the academic program, saves time with organization and gives a sense of pride for the school. Having a warm office staff, super important too!

After spending a few hours at North Star I took the longest uber ride ever to Penn Station to catch my Amtrak train to Albany for the Uncommon Impact Behavior and Culture Workshop. Two days with Teach Like A Champion guru Dave Lemov. He’s a celebrity in the Ed World, and it was some of the best professional development I’ve ever attended. I feel much more comfortable with coaching teachers to improve their ability to manage classrooms so that they can focus their attention on academics, not behavior. We got lots of good practice (I just read Practice Perfect, and I’m sold). I also managed to spend 2 full days inside and ran an entire three miles while I was in Albany on this awful dreadmill with a Cindy Crawford skincare infomercial streaming in the background. Yes, I just googled Desmond Hotel treadmill.

By Friday night I was feeling pretty blah about running. I was questioning how prepared I was for this marathon and was freaking out about my calf and shin tightness. I had a bad 16 miler, ran 3 miles in Albany, and this is supposed to be my peak. I was also very jealous of Marta who didn’t have a plan to work off of and who was done running her marathon. Next week. I told myself, next week I’ll peak before my final 20+ run. Hungry Runner Girl posted this on her blog yesterday, and it make me feel 1000 times better about my running life right now.

Friday night I rushed to the Amtrak station and took a train back into the city, dropped my stuff off at Carmen and Jim’s and Brent (who flew in Thursday) and I went straight to dinner to hang out with Meredith and Nicole, my Columbia buddies. It was strange seeing them in snowy weather rather than sweating in the summer. 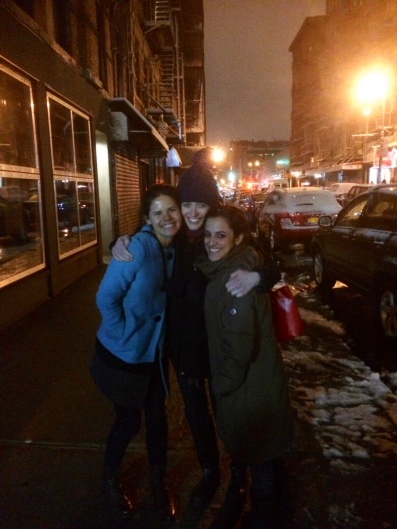 Saturday and Sunday were family days. My entire family came to New York for the weekend. Marta came from LA. My parents flew in from Michigan, and Alicia and the fam drove up from DC. We didn’t do much besides play with our selfie stick, shop, playing with Colby and Miles and eat. Gotta love family time.

Sunday night I shuffled again. Marta ended up staying in New York for work, so she got a hotel room in midtown. We planned on running the Central Park loop before going to Sushi Samba for dinner, but our poor packing forced us in the gym. Over the weekend I was able to have a few good treadmill workouts. A six-mile tempo, and a six-mile easy. Would have loved more distance but six miles is beyond my treadmill limit. My legs felt so much better. I think the icing (and natural icing from cold weather) and strengthening exercises are helping. Maybe the Albany low mileage days were a blessing. I’m SO excited to get back to yoga on Wednesday. I’m feeling super tight.

Monday morning Marta and I hit the gym, and were determined to get a GOOD New York bagel so we sprinted half a mile to Pick-a-Bagel for a bacon, egg and cheese. 25-degree weather in shorts was worth it for the bagels.

I then took the 6 up to the Bronx and spent Monday morning at South Bronx Classical Academy in Mott Haven. I observed primarily Kindergarten classrooms and was again reminded at just how much Kindergarteners can handle academically. I find it fascinating to listen to their thinking and watch them work through challenging content. After a few hours in the Bronx, I headed back into Manhattan and got lunch with Carmen at Chopt (they need this in LA). She showed me around the Amazon Publishing office before I headed back to the hotel, packed up and headed to JFK.

Check our some LA Marathon Pics. Ellen and I ran a combined 3:13:01 and were the FIRST relay team. 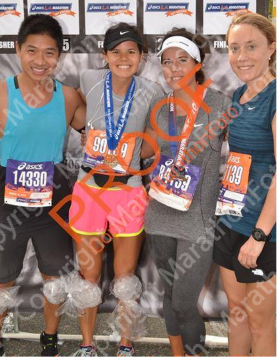 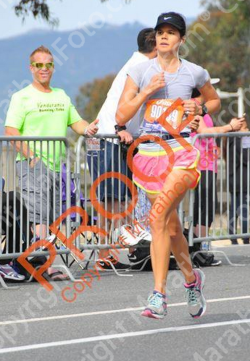 Enjoy the rest of your week!